The authors of two novels, a memoir, and two poetry collections are vying to be named 2020 Sunday Times / University of Warwick Young Writer of the Year: The judges have shortlisted Londoner Jay Bernard for their first full collection, Surge, on the New Cross Fire; the US-born, UK-based literary agent Catherine Cho for Inferno, an account of her experience with postpartum psychosis; Irish writer Naoise Dolan for her Hong Kong set debut novel Exciting Times; the Dublin-based poet Seán Hewitt for his mythical debut collection Tongues of Fire; and Marina Kemp, from London, for her first novel, Nightingale, set in rural France. 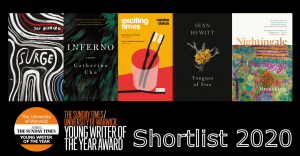 Houman Barekat said: “Shortlists don’t have to be eclectic, but it ’s nice when they are. There is something here for everyone: Naoise Dolan’s Exciting Times has a very contemporary fizz, whereas the careful pacing of Marina Kemp’s Nightingale will appeal to readers of more conventional novels, the collage aesthetic of Jay Bernard’s Surge complements the more traditional lyricism of Seán Hewitt ’s
Tongues of Fire, while Catherine Cho’s illness memoir Inferno is a powerful work of non-fiction.”

Kit de Waal said: “Wonderful writing from exciting young authors, demonstrating a range of technical ability, outlook and style. It ’s been a privilege to read their work and to have been immersed in their worlds.”

Sebastian Faulks said: “I was impressed by the technical ability in different forms shown by these writers. They have absorbed the lessons of those who have gone before them; but their own books all seem urgent and modern.”

Tessa Hadley said: “ The books stand out because they’re so well written, with important things to say – and the wonderful thing is that they have nothing in common apart from that. Each book is its own kingdom, an exciting new world to discover, with its own style and its own subject. Each is authoritative, intelligent, with clear vision, and sets its own rules.”

Sponsored by the University of Warwick, home to the acclaimed Warwick Writing Programme, the prize is each year given to the best work of fiction, non-fiction or poetry by a British or Irish author under 35. In addition to the prize money of £5,000, the winner will be offered a bespoke 10-week residency by the University of Warwick. The London Library – host of the winner ceremony in previous years – adds a year ’s membership to the attractive winner package. All shortlisted authors will be championed overseas by prize partner the British Council.

• In Surge, Jay Bernard embarks on a fearless enquiry into the New Cross Fire of 1981, in which thirteen young black people were killed. They won the Ted Hughes Award for New Work in Poetry for Surge: Side A where some of the poem in the collection first appeared.

• The reader joins Catherine Cho on the psychiatric ward (and for a journey into her past) after she’s diagnosed with a rare form of postpartum psychosis. Her memoir Inferno explores psychosis, relationships and motherhood.

• Sex, grief, and loss meet a dedication to life, hope and renewal in Seán Hewitt’s Tongues of Fire. The debut collection contains prayers, hymns, vespers, incantations, and longer poems which attempt to propel themselves towards the transcendent.

• In Nightingale, a 24-year old leaves Paris for a sleepy French village to take up a job as a live-in nurse. As opinions and relationships are formed, Marina Kemp unveils surprising secrets as she builds her debut novel.

The country’s most influential prize for young writers, the Young Writer of the Year Award has consistently spotted and supported the leading writers of a new generation since its return in 2015, and has been won in the past by a Who’s Who of modern British and Irish literature, from Zadie Smith and Sarah Waters to poet laureate Simon Armitage and Robert Macfarlane. The 2020 winner will join Raymond Antrobus (2019), Adam Weymouth (2018), Sally Rooney (2017), Max Porter (2016) and Sarah Howe (2015) on the impressive list of recent alumni.