THE TRUTH ABOUT THESE STRANGE TIMES 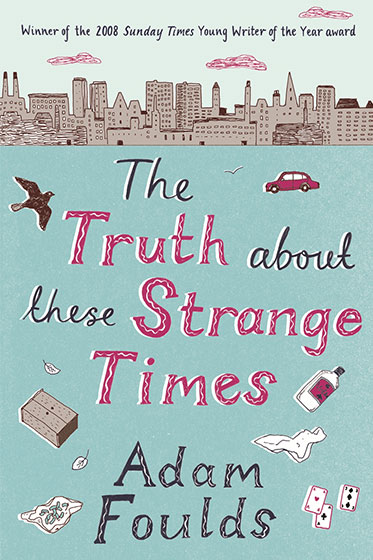 Adam Foulds was born and raised in London. He studied English at St Catherine’s College, Oxford, and was awarded an MA from the University of East Anglia, where he studied Creative Writing. He has had poetry published in various magazines, including Quadrant and Stand. He received the Harper-Wood Fellowship from St John’s College, Cambridge. He was elected a Fellow of the Royal Society of Literature in 2010. His books include the Booker-shorlisted The Quickening Maze and the poetic sequence The Broken Word. He was named one of Granta’s Best of Young British Novelists 2013.

THE TRUTH ABOUT THESE STRANGE TIMES

Saul Dawson-Smith can memorise the sequence of a shuffled deck of cards in under a minute; he can recite pi to a thousand decimal places and he remembers every conversation he’s ever had. He is ten years old. Howard McNamee is twenty-eight: lonely, overweight and poorly educated. He lives far from the scene of his difficult Glasgow childhood, in the home he shared with his mother. Struggling to pay his rent with a succession of menial jobs, Howard comes home each day and talks to the late Mrs McNamee, as he sits in front of the wardrobe that still contains her clothes. These two solitary people find themselves forming an unlikely friendship, as Howard is taken under the wing of Saul’s parents, thrust into a life in London (where he tries to navigate a bewildering new city and accidentally acquires a Russian internet fiancee), and Saul prepares himself for the World Memory Championships – the event he has been training for his whole life. But as the pressure mounts on the young boy Howard realises he must act to save his small friend from a life of unbearable expectation. The decision he reaches turns all of their lives upside down.