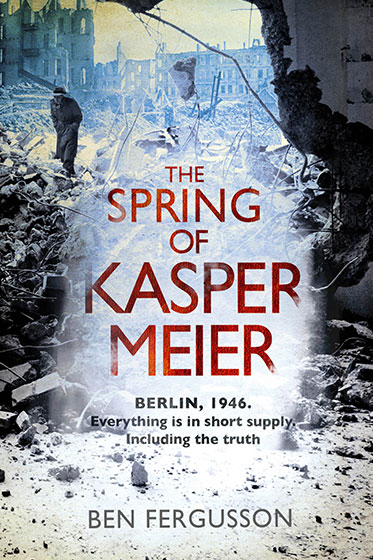 Ben Fergusson is a writer, editor and translator. Born in Southampton in 1980, he studied English Literature at Warwick University and Modern Languages at Bristol University, and has worked for ten years as an art book editor and publisher. His short fiction has appeared in publications in both the UK and the US and has won and been shortlisted for a range of prizes. His debut novel, The Spring of Kasper Meier, won the Betty Trask Prize and the HWA Debut Crown Award. He currently lives in Berlin.

In The Spring of Kasper Meier it is spring 1946 and Berlin is a city of ruins, poverty and a thriving black market. Among the debris of the collapsed Third Reich, occupying soldiers begin to be murdered. A young ‘rubble woman’, Eva Hirsch, pays a visit to Kasper Meier, a cynical, one-eyed black-market trader, gifted in finding things for people, from tinned ham and penicillin, to information. This nervous young girl needs Kasper to find a British pilot for her and, when he refuses, she secures his services with her own information: she knows that Kasper is keeping a dangerous secret.