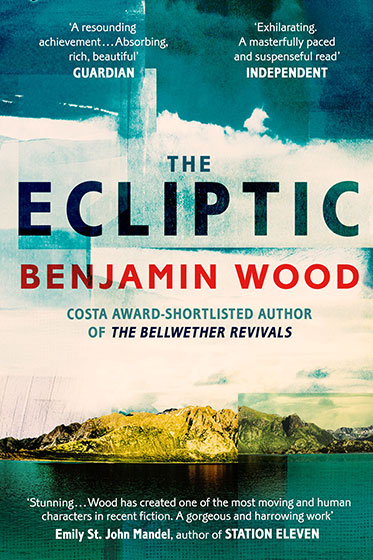 Benjamin Wood was born in 1981 and grew up in northwest England. He holds an MFA in Creative Writing from the University of British Columbia, Canada, which he attended with the support of a Commonwealth Scholarship. In 2012, Benjamin’s first novel THE BELLWETHER REVIVALS was published. It was shortlisted for the Costa First Novel Award, the Commonwealth Book Prize and le Prix du Roman Fnac, and has gone on to become a bestseller.

The Ecliptic is a rich and immersive story of love, obsession, creativity and disintegration. On a forested island off the coast of Istanbul stands Portmantle, a gated refuge for beleaguered artists. There, a curious assembly of painters, architects, writers and musicians strive to restore their faded talents. Elspeth ‘Knell’ Conroy is a celebrated painter who has lost faith in her ability and fled the dizzying art scene of 1960s London. On the island, she spends her nights locked in her blacked-out studio, testing a strange new pigment for her elusive masterpiece. But when a disaffected teenager named Fullerton arrives at the refuge, he disrupts its established routines. He is plagued by a recurring nightmare that steers him into danger, and Knell is left to pick apart the chilling mystery. Where did the boy come from, what is ‘The Ecliptic’, and how does it relate to their abandoned lives in England?