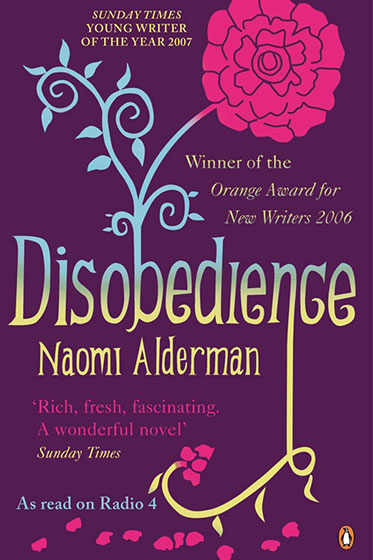 Naomi Alderman grew up in London and attended Oxford University and UEA. In 2006 she won the Orange Award for New Writers. In 2007, as well as being named Sunday Times Young Writer of the Year, she was also voted one of Waterstones’ 25 Writers for the Future.

Naomi broadcasts regularly, has guest-presented Front Row on BBC Radio 4 and writes frequently for the Guardian. She is one of the presenters of Science Stories, a programme about the history of science on BBC Radio 4, as well as presenting many one-off documentaries.

Naomi is Professor of Creative Writing at Bath Spa University.

By the age of 32, Ronit has left London and transformed her life. She has become a cigarette-smoking, wise-cracking, New York career woman, who is in love with a married man. But when Ronit’s father dies she is called back into the very different world of her childhood, a world she thought she had left far behind. The orthodox Jewish suburb of Hendon, north London is outraged by Ronit and her provocative ways. But Ronit is shocked too by the confrontation with her past. And when she meets up with her childhood girlfriend Esti, she is forced to think again about what she has left behind.