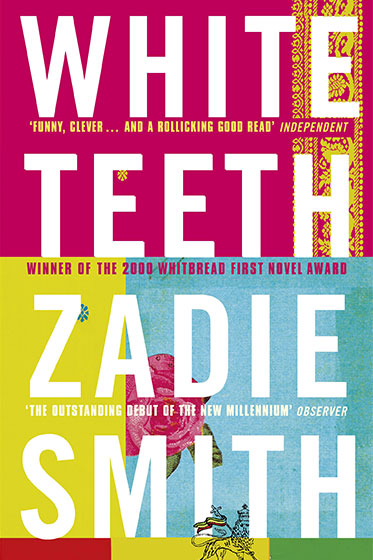 Zadie Smith was born in north-west London in 1975. She was elected a fellow of the Royal Society of Literature in 2002, and was listed as one of Granta’s 20 Best Young British Novelists in 2003 and again in 2013. Zadie Smith is currently a tenured professor of fiction at New York University and lives in New York with her husband and two children. Her most recent novel, published in 2016, is Swing Time.

At the center of this invigorating novel are two unlikely friends, Archie Jones and Samad Iqbal. Hapless veterans of World War II, Archie and Samad and their families become agents of England’s irrevocable transformation. A second marriage to Clara Bowden, a beautiful, albeit tooth-challenged, Jamaican half his age, quite literally gives Archie a second lease on life, and produces Irie, a knowing child whose personality doesn’t quite match her name (Jamaican for “no problem”). Samad’s late-in-life arranged marriage (he had to wait for his bride to be born), produces twin sons whose separate paths confound Iqbal’s every effort to direct them, and a renewed, if selective, submission to his Islamic faith. Set against London’ s racial and cultural tapestry, venturing across the former empire and into the past as it barrels toward the future, White Teeth revels in the ecstatic hodgepodge of modern life, flirting with disaster, confounding expectations, and embracing the comedy of daily existence.