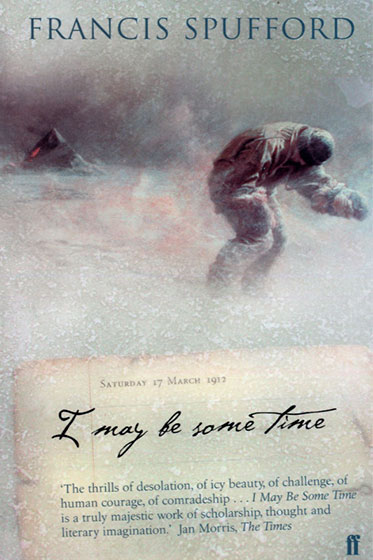 Francis Spufford was born in 1964. He is the author of five highly-praised books of non-fiction, most frequently described by reviewers as either ‘bizarre’ or ‘brilliant’, and usually as both.  He has been longlisted or shortlisted for prizes in science writing, historical writing, political writing, theological writing, and writing ‘evoking the spirit of place’. In 2007 he was elected a Fellow of the Royal Society of Literature. He teaches writing at Goldsmiths College, University of London, and lives near Cambridge. His first novel, Golden Hill, won the 2016 Costa First Novel Award.

I May Be Some Time is a richly engrossing cultural history of our obsession with ice, Eskimos and polar exploration.

When Captain Scott died in 1912 on his way back from the South Pole, his story became a myth embedded in the national imagination. Despite wars and social change, despite recent debunking, it is still there. Everyone remembers the doomed explorers’ last words – ‘I’m just going outside, and I may be some time’ – and history is what you can remember.

Conventional histories of polar exploration trace the laborious expeditions across the map, dwelling on the proper techniques of ice-navigation and sledge-travel. But we rarely ask what the explorers thought they were doing, or why they did these insane things.