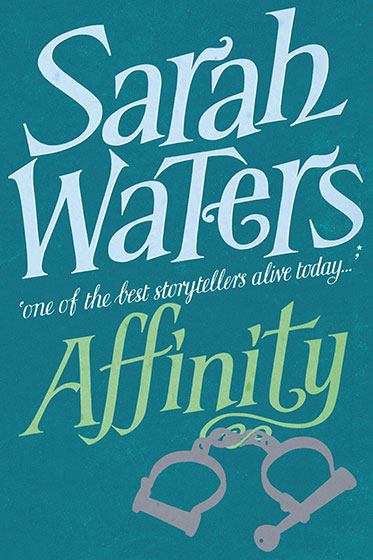 Sarah Waters was born in Wales and lives in London. Author of Tipping the Velvet, Affinity, Fingersmith, The Night Watch and The Little Stranger, her most recent book is The Paying Guests. Her books has garnered numerous prizes: she won a Betty Trask Award, the Somerset Maugham Award and was twice shortlisted for the Mail on Sunday/John Llewellyn Rhys Prize. Fingersmith and The Night Watch were both shortlisted for the Man Booker and Orange prizes, and Fingersmith won the CWA Ellis Peters Dagger Award for Historical Crime Fiction and the South Bank Show Award for Literature. Tipping the Velvet, Affinity and Fingersmith have all been adapted for television.

Set in and around the women’s prison at Milbank in the 1870’s, Affinity is an eerie and utterly compelling ghost story, a complex and intriguing literary mystery and a poignant love story with an unexpected twist in the tale. Following the death of her father, Margaret Prior has decided to pursue some ‘good work’ with the lady criminals of one of London’s most notorious gaols. Surrounded by prisoners, murderers and common thieves, Margaret feels herself drawn to one of the prisons more unlikely inmates – the imprisoned spiritualist – Selina Dawes. Sympathetic to the plight of this innocent-seeming girl, Margaret sees herself dispensing guidance and perhaps friendship on her visits, little expecting to find herself dabbling in a twilight world of seances, shadows, unruly spirits and unseemly passions.