Scottish author and journalist Cal Flyn has been named winner of the 2021 Sunday Times Charlotte Aitken Trust Young Writer of the Year Award for her eerie yet ultimately optimistic account of ecological diversity, Islands of Abandonment. 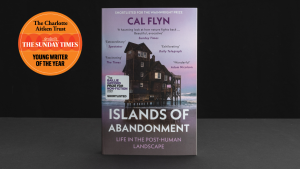 Celebrating its 30th anniversary this year, the UK’s most influential prize for young writers has for three decades been a definitive indicator of rising literary talent in Britain and Ireland, recognising such names as Zadie Smith, Simon Armitage, Max Porter and Sally Rooney in the early stages of their careers.

Today, Cal Flyn joins that legacy for her impressive work Islands of Abandonment, which was previously shortlisted for the Baillie Gifford Prize and the Wainwright Conservation Award. It is a book about abandoned places: ghost towns and exclusion zones, no man’s lands and fortress islands – and what happens when nature is allowed to reclaim its place.

Judge Tahmima Anam said: “We all fell hard for this book: the originality of thinking, the intellectual rigor, the love for all that is gone and yet not entirely lost, and of course the sheer magic of the prose. Cal Flyn finds sublime beauty in the most unlikely of places, and, in doing so, gives us all reason to hope that our planet may yet be saved. You cannot ask for a better reason to read.”

Judge Gonzalo C. Garcia said: “Flyn’s prose is simply exceptional. Islands of Abandonment surprised me as a skilful and original work whose powerful lyricism heightens chronicles of blight and restoration to a renewed awareness of the environmental impact of our presence (and importantly, our absence). It’s difficult not to get excited about the future of this magnificent young writer. A fantastic talent and deserving winner.”

Judge Claire Lowdon said: “Islands of Abandonment is a counterintuitive redemption story, a dazzling blend of ecology, natural history, literature and aesthetics. All the writers here should be applauded for tackling difficult subjects head on. Cal Flyn stands out not just from this formidable shortlist, but from every book you’ll ever read. We are facing a terrifying environmental crisis of our own making, and it ’s tempting to put our heads down and try to forget about it. Flyn’s writing will make you look up, look around, and see the world and humankind’s place in it in entirely new ways.”

Judge Sarah Moss said: “Islands of Abandonment has a rare combination of intellectual rigour, lyrical writing and respect for ambiguity and ambivalence. We all recognised its outstanding qualities on first reading. I expect that we will be eagerly reading Cal Flynn for many years to come.”

Judge Andrew O’Hagan said: “From a very strong shortlist we chose a winner in full possession of her subject. Islands of Abandonment is a book that echoes with substance, relevance, humanity, and style. We admired the originality of Cal Flyn’s vision and for me her book amounts to a riveting kind of moral reporting, a Silent Spring for the post-Cold War world. In making her the winner of this year ’s award we feel certain she will go in to produce first-rate work for many years to come. Unforgettable writers start with an unmistakeable voice, and Cal Flynn has exactly that.”

“The book explores the extraordinary places where humans no longer live – or survive in tiny, precarious numbers – to give us a possible glimpse of what happens when mankind’s impact on nature is forced to stop. From Tanzanian mountains to the volcanic Caribbean, the forbidden areas of France to the mining regions of Scotland, Flyn brings together some of the most desolate, eerie, ravaged and polluted areas in the world – and shows how, against all odds, they offer our best opportunities for environmental recovery.”

The announcement was made at an event at The London Library, in a warmly celebrated return to in-person prize ceremonies. The event was hosted by The Sunday Times’ Literary Editor Andrew Holgate, alongside 2021 judges Andrew O’Hagan, Tahmima Anam, Claire Lowdon and Gonzalo C. Garcia, as well as Chair of the Charlotte Aitken Trust, novelist Sebastian Faulks.

In this special anniversary year, the award joins forces with a major new sponsor, the Charlotte Aitken Trust, which, in memory of his daughter, aims to continue Gillon Aitken’s work of encouraging literary talent and aims to advance the education of the public in the subject of literature. The sponsorship of the award enables the prize to significantly extend its core mission of supporting and developing young literary voices in the UK and Ireland, and doubles the prize money to £10,000 with £1,000 for each shortlisted author.

The 2021 award also marks a new partnership with Waterstones who are supporting the prize with in-store POS in shops across the country, including bespoke 30th anniversary bookmarks showcasing the heritage of the award and this year ’s Young Writers.

Andrew Holgate, Literary Editor of the Sunday Times said: “It ’s one thing to have written such an original and gripping book as Islands of Abandonment. It ’s quite another thing to be such a superb stylist and writer as Cal Flyn has shown herself to be in this book. Over the years the Sunday Times Young Writer of the Year Award has made a habit of celebrating superb nature writers – Robert Macfarlane, William Fiennes, Adam Weymouth – and Flyn with this superb book more than matches these predecessors. Watch out for her; she is already a superb writer, and she has the potential to be so much more.”

Sebastian Faulks said: “The judges have done a terrific job. This is exactly the kind of list we were hoping to see and the Charlotte Aitken Trust is thrilled to be a part of this award.”

Bea Carvalho, Head of Fiction at Waterstones, said: “We are thrilled that Cal Flyn has won The Sunday Times Charlotte Aitken Young Writer of the Year Award. Islands of Abandonment is non-fiction at its most urgent and fascinating: it is a stunningly clever and energising piece of writing which begs to be read and recommended widely. We are delighted to have a new opportunity to celebrate this brilliant book following its stint as Waterstones Non-fiction Book of the Month in January.”

Cal Flyn is an author and journalist from the Highlands of Scotland. She has reported for both the Sunday Times and the Daily Telegraph and writes regularly for publications including Granta, the Guardian and Prospect. Her first book, Thicker Than Water, was a Times book of the year and dealt with the colonisation of Australia and questions of inherited guilt. She was made a MacDowell fellow in 2019, and currently lives in the Orkney Islands.

Cal Flyn joins Jay Bernard, Raymond Antrobus, Adam Weymouth, Sally Rooney, Max Porter and Sarah Howe as the seventh writer in an exceptional line-up of defining new voices spotted and supported by the Young Writer of the Year Award since it returned from a 7-year break in 2015.

The judges chose Flyn from a shortlist of five that also included poet Rachel Long (for My Darling from the Lions), as well as novelists Megan Nolan (for her debut Acts of Desperation), Anna Beecher (for Here Comes the Miracle) and Caleb Azumah Nelson (for Open Water).

Administered by the Society of Authors, the Sunday Times Charlotte Aitken Young Writer of the Year Award works with a growing network of partners to provide a critical support system to the very best talent at work right now.

The winner will also be offered a bespoke 10-week residency by the University of Warwick. The London Library adds two years’ membership to the attractive winner package, as well as a year ’s membership for the shortlist. All shortlisted authors will be championed overseas by prize partner the British Council.